I don't write in my blog as often as I should - there always seems to be something with a higher priority. I regret that, as I don't see the sweet face of my kitty, Toby, on these pages. Toby came to us two years ago, in December, 2014. We had lost our two cats that year - Duke in January and Sydney in September - and it was too quiet in the house. However, I had said to Dan, "no more cats!" and I meant it. Until... 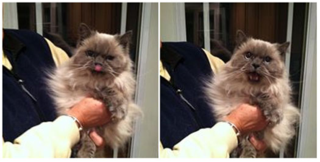 I was on the Facebook Group for Certified Zentangle Teachers and saw a post about this guy, needing a home. He was a 6 year old Himalayan cat, whose owner had died and he lived 3+ hours away. Ridiculous to even contemplate a scruff-muffin, older, uber-hairy boy-who-is-also-a-cat. Maybe a girl dog, but not a cat.

Yet...as hard as I tried, I could not get him off my mind. So one week later, we were meeting his kind caretaker in the parking lot of Friendly's in Lee, MA, half-way in between our respective homes, to take Toby home. Poor kitty. He was scared to death and frankly, so were we. We had never even met this cat and here we were taking responsibility for his care and well-being.

From the post title, you already know what a good move it was for all. Toby slowly accustomed himself to us and Dan and I, to him. They had said he was "a love" and that was so accurate. He purred if you even looked his way and within three months, we were all in love. Here is a more recent photo of Toby helping me out in my studio. The high stool was a favorite spot and he would curl up and go to sleep, keeping me company as I worked. 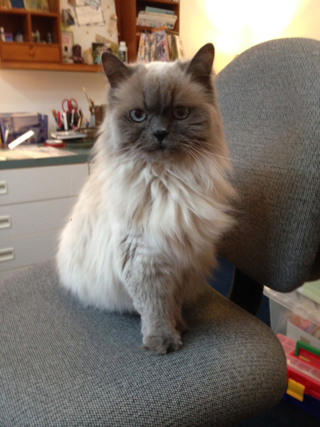 Look at that handsome face! Who wouldn't love this sweet, gentle boy. He nuzzled his way into my heart and I adored him.

If you noted the past tense, you'll know that this does not end on a happy note. Last weekend, I noticed that Toby had chunked up around his abdomen and it seemed to become more pronounced daily. On Tuesday, we were off to the Vet. He recommended an ultra-sound which we scheduled for yesterday, New Year's Eve. We left our boy at the Vet in the morning and he called later to tell us that the fluid around Toby's abdomen was a result of cancer in some part of his body and that it had spread to his liver, which looked "like swiss cheese." There was no pill that could fix this and he didn't have long. 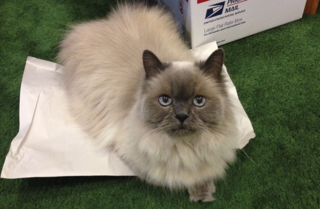 Too fluffy to fit or ship! (click to enlarge)

This is the nightmare of pet owners. Not only are you losing a member of your family but you need to make a decision about euthanizing that family member. Our cat, Sydney, also had cancer and the progression of it was not something we wanted to put Toby through. Our last bit of time with him was yesterday afternoon at the Vet's office and he was his usual loving self. It was devastating but Toby only felt our loving arms around him at the end.

Euthanasia has been called the "last act of love" and I believe it to be true. It takes courage to make the choice and see it through. Dan and I have had to do so three times in the last three years - way too much. Toby was with us for just two years; not long enough. Never the less, we don't regret adopting him. For all the pain we feel at his loss, the affection and joy this little guy brought us puts us well on the plus side of the equation. 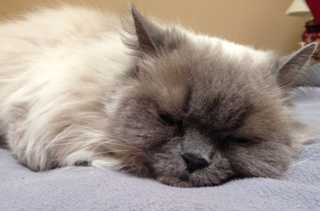 This long post is an homage to my sweet boy. It's not important that anyone else reads it - just that I wrote it. If you do read it, please hug your fur babies for me and give them some extra love today.

There is heartbreak at the end of every animal, but they are so worth it.

So sorry to hear this sad news Melissa! It is really tough to have to say good-bye to a pet, but you did the right thing. Pets do become an integral part of your family - their unconditional love is very heartwarming.

Melissa- so very sorry to read this. My heart broke when I heard you lost Sydney and duke- but then I was so happy when Toby's sweet face appears in my Facebook newsfeed. I will hug mister harley extra tight for you today in which he will probably proceed to scratch me (ha!) but it will be worth it.
Thinking of you and dan. No words to comfort you just know I am sending you a {hug}

I am not a big blog reader but I for some reason I did today. Your ability to put into words your thoughts and feelings were a perfect way to begin my day. I am sorry for your loss - loss is always hard. But... your love shines through!

Oh Melissa and Dan. You made me cry. I am so sorry. You wrote a beautiful piece for your beloved Toby. Blessings had and more sent. Love, Peggy.

Thank for your note Fran. It is tough to lose them and, at the same time, impossible not to love and cherish them too =^..^=
Melissa

I know how much you understand Jenn. Thank
you for the hugs for both me and Mister H, on my behalf :) It is much appreciated kiddo. Hope you, Chris and Mister Harley have a wonderful 2016!

What a lovely message to receive Eileen. Thank you for your kind words and sympathy. It is much appreciated - your kindness helps soothe the hurt =^..^=

Thank you Peggy! You are one who wears your heart on your sleeve, as I do, so of course I made you cry :) Thank you for the blessings and know they are returned two-fold. Love to you too.

So sorry to hear this, the loss of a beloved pet is so hard.
I wish you sweet memories as balm for your sad heart.

A beautiful homage to a beautiful boy. I dread the day I have to make the decision for Max. I am so sorry for your loss, Melissa and Dan. I agree, that they are worth the heartbreak. Big hug!!

Thank you for your note Tracy - it's nice of you and much appreciated. Our memories are indeed, sweet.

It's the worst Kerri. Don't think about though, just enjoy Max as much as you can and give him a hug from me. Thanks much.

So sorry for your loss. It is indeed very hard to say goodbye to your fur babies. I will give my brothers a hug for you.

I had a Himalyan - Sweet Judy Blue Eyes. We just called her Judy. She was a lovebug. I really feel your pain. I'm glad she had you to take care of her.

Just found this by accident - so very sorry to hear about your Toby. I cried while reading your homage. We had to make the same heart-wrenching decision last October for our sweet cocker spaniel Bailey, 14 years old. But I agree with your final statement and that the unconditional love of a pet leaves a sinkhole in your heart when it's time to say farewell. The joy will always remain.

I have a soft spot in my heart for cocker spaniels, Jan, as we had one growing up, Taffy. She was my very best friend. Thank you for commiserating!

The comments to this entry are closed.